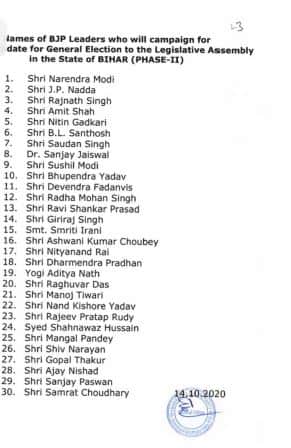 Prime Minister Narendra Modi will hold 12 election rallies in Bihar ahead of the Assembly polls, according to an announcement made by former Maharashtra chief minister and BJP’s election in-charge Devendra Fadnavis on Friday (October 16, 2020). Giving more details about PM’s election rally, Fadnavis said that the rallied will be held on October 23, October 28, November 1 and November 3.

On October 23, PM will visit  Sasaram, Gaya and Bhagalpur whereas on October 28, PM will hold rallies in Darbhanga, Muzaffarpur and Patna. On November 1, PM will address the crowd in Chahapra, East Champaran and Samastipur and his last rally will be on November 3 in West Champaran, Saharsa & Araria.

Recently, the LJP decided to go solo and field candidates against the ruling JDU over rising differences between the two Bihar-based parties.

The 243-member Bihar Assembly will go to the polls in three phases — on October 28, November 3 and 7 — and the results will be announced on November 10.